Time to bring some life into the Ghost in the Shell series with Part 3 article.

I haven’t found better name for that solution. There are generally two types of UNIX people. These that prefer to navigate and operate with basic ls/cd/mv/mkdir/rm commands and those who use some file manager like Midnight Commander (mc) or ranger or vifm or … you get the idea. I have tried various CLI file managers but always came back to navigate without them. If you are one of those people then these Query Functions are for you 🙂

The so called Query Functions are for filter the information you look for. For example if you have directory with large number of files, then you would probably do something like that.

… or if you also want to include subdirectories then something like that.

For both of these examples you would also probably want to sometimes search case sensitive or insensitive depending on the need.

That leads us to four Query Functions:

Thus if I need to query the contents of directory while searching for something is very fast with q SOMETHING.

These are definitions of these Query Functions:

The qq and QQ functions uses grep(1) two times to make sure the output is colored.

I assume that You use colored grep(1) described in Ghost in the Shell – Part 2 article.

If you prefer to use alias(1) instead then they would look like that.

The qq and QQ will be little more limited as with functions its possible to trim the output to the exact needs with cut(1).

Lots of people use recursive history search which also helps, but what if you used/typed needed command long ago with the arguments you need now? You would probably search the command with history(1) command and then using grep(1) to limit the results to what you look for. I keep enormous large list of commands to keep in history – with my current setting of 655360 the ~/.zhistory (ZSH) file takes about 2.7 MB size. I also wanted to be sure that two identical commands would not be kept in history hence the setopt hist_ignore_all_dups ZSH option enabled. When I wc -l my ~/.zhistory file it currently has 75695 lines of commands.

Now back to Query Functions for history:

They fit in aliases this time. In alias(1) we will use just grep(1) to not ‘do’ Useless Use of Cat.

Here are the Query Functions for history.

Now it will be just q QUERY | g ANOTHER and h QUERY | G ANOTHER for example.

To clear terminal output you may use clear(1) command, some prefer [CTRL]-[L] shortcut but I find ‘c‘ alias to be the fastest solution.

To make the solution complete I would also add exa(1) here with an alias of ‘e‘.

Why exa(1) will you ask while there is BSD ls(1) and GNU ls(1) (installed as gls(1) on FreeBSD to not confuse). To add GNU ls(1) to FreeBSD system use the coreutils package. 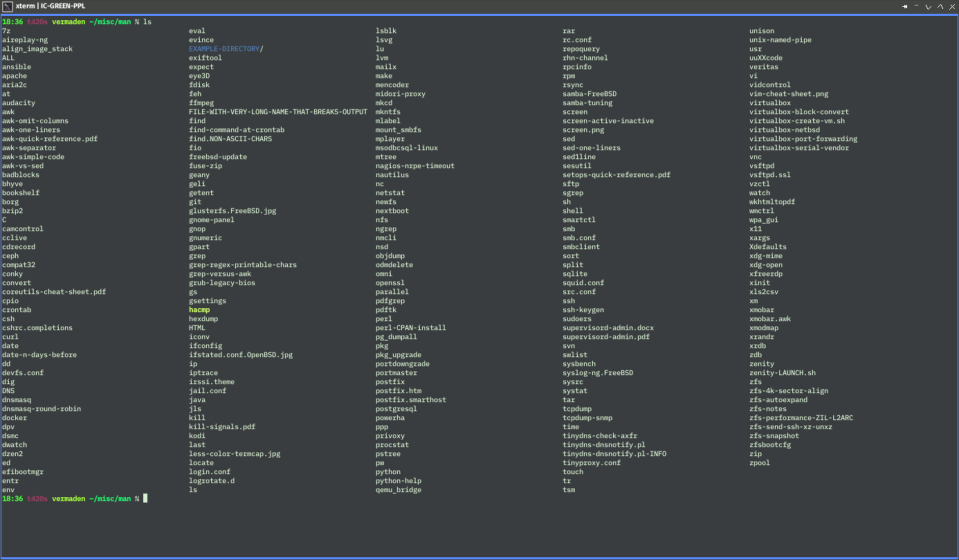 The BSD ls(1) was used as following alias:

The GNU ls(1) does not have these two problems but it does color the output only on the very limited pattern like:

The GNU ls(1) was used as following alias:

Here is where exa(1) comes handy as it does not have any cons like FreeBSD’s ls(1) and it colors a lot more types of files.

Its still very simple coloring based on file extension and not magic number as plain (empty) text file SOME-NOT-FILE.pdf is colored like PDF document.

But even this ‘limited’ coloring helps in 99% of the cases and while with BSD ls(1) and GNU ls(1) all of these files ‘seem’ like plain text files with exa(1) its obvious from the start which are plain files, which are images and which are ‘documents’ like PDF files for example.

Where Is My Space

On all UNIX and Linux systems there exists du(1) command. Combined with sort(1) it is universal way of searching for space eaters. Example for the / root directory with -g flag to display units in gigabytes.

But its PITA to type cd and du all the time, not to mention that some oldschool UNIX systems does not provide -g or -m flags so on HP-UX you are limited to kilobytes at most.

This is where ncdu(1) comes handy. Its ncurses based disk usage analyzer which helps finding that space eaters in very fast time without typing the same commands over and over again. Here is ncdu(1) in action.

First it calculates the sizes of the files. 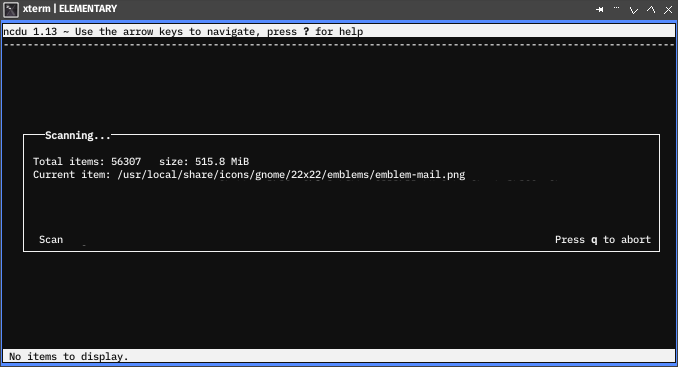 After a while you get the output sorted by size. 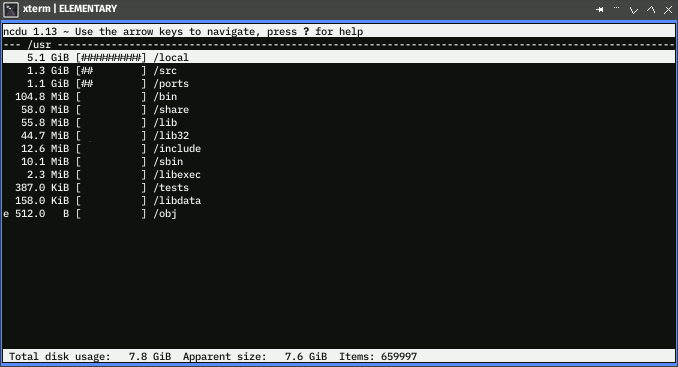 If you hit [ENTER] on the directory you will be instantly moved into that directory. 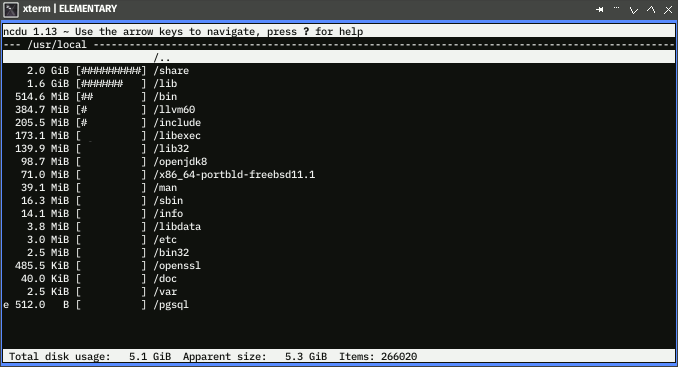 If you delete something with ‘d‘ then remember to recalculate the output with ‘r‘ letter.

It also has great options such as spawning shell ‘b‘ in the current directory or toggle between apparent size and disk usage with ‘a‘ option. The latter is very useful when you use filesystem with builtin compression like ZFS.

So I have 1.13 compression ratio on the ZFS filesystem. More then 5 GB saved just in that directory 🙂

Where Are My Files

Once I got some space back I also wanted to know if there are some directories with enormous amount of very small files.

First I came up with my own files-count.sh script solution which is not that long.

It works reliably but same as with du | sort tandem you have to retype it (or at least use cd(1) and hit [UP] arrow again) … but then I discovered that ncdu(1) also counts files! It does not provide ‘startup’ argument to start in this count files mode but when you hit ‘c‘ letter it will instantly display count of files in each scanned directory. To sort this output by the count of files hit the ‘C‘ letter (large ‘C‘ letter). 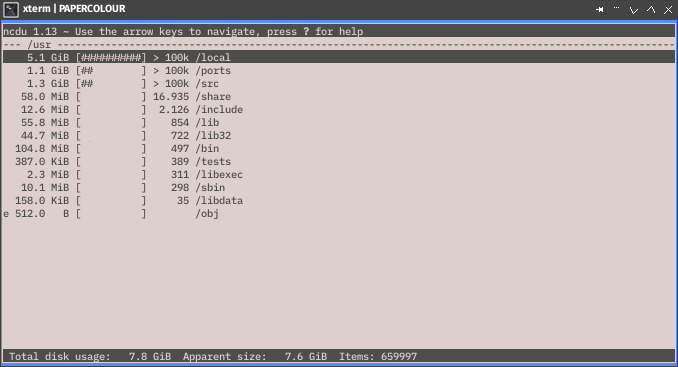 … but what if there were some very big files hidden somewhere deep in the directories tree? The du(1) or ncdu(1) will not help here. As usual I though about short files-big.sh script that will do the job.

An example usage on the /var directory.

The output is in ‘executable’ format so if you select whole line and paste it into terminal, then this file will be deleted. By default it uses doas(1) but nothing can stop you from putting sudo(8) there. Not sure if you will find it useful but it helped me at least dozen times.

How Many Copies Do You Keep

I often find myself keeping the same files in several places which also wastes space (unless you use ZFS deduplication of course).

The dedup.sh script I once made is little larger so I will not paste it here and just put a link to it.

It has the following options available. You may search/compare files by name or size (fast) or by its MD5 checksum (slow).

By copying the zfs-notes file into the zfs-todo file I wanted to show you what dedup.sh will print on the screen, but accidentally I also found another duplicate 🙂

The output of dedup.sh is simple and like with files-big.sh script selecting the while line and pasting it into the terminal will remove the duplicate. By default it uses doas(1) but you can change it into sudo(8) if that works better for you.

Most of us already remember what the five fields of crontab(5) file mean, but what if you would like to run command every second … or after reboot only? The answer lies in the man 5 crontab page. Here are these exotic options.

Many times I found myself lost lots of time debugging what went wrong when my script was run by the crontab(5) file. Often it was some variable missing or some command or script I used was not in the PATH variable.

To make that debugging faster You can use ENV.sh script to just store the cron(1) environment.

The ENV.sh script will write current environment in the /tmp/ENV.out file.

Lets put it into the crontab(5) for a test.

Now after at most a second you can check for the contents of the /tmp/ENV.out file.

I found myself many times in a situation that I would want to allow download of some files from my machine and SSH could not be used.

This is when python(1) comes handy. It has SimpleHTTPServer (or http.server in Python 3 version) so you can instantly start HTTP server in any directory!

Here are the commands for both Python versions.

I even made a simple http.sh wrapper script to make it even more easy.

Here is how it looks in the Epiphany browser. 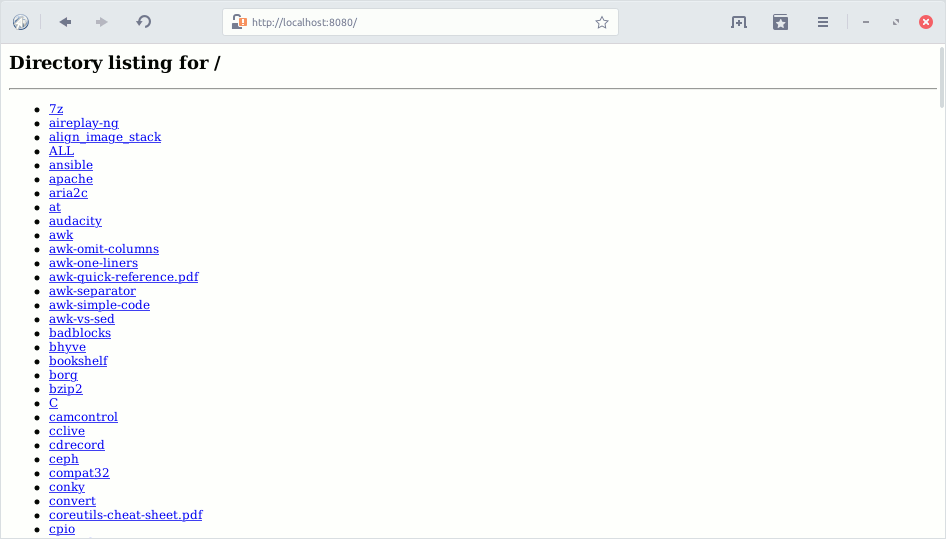 Mine ftp.py wrapper is little bigger as you can write quite comlicated setups with pyftpdlib but mine is simple, it starts in the current directory and adds read only anonymous user and read/write user named writer with WRITER password.

The ftp.py is handy if you want to enable someone to upload something for you (or you are doing it o the other machine) when SSH/SCP is not possible for some reason.

Here is its terminal startup and logs.

… and how Firefox renders its contents. 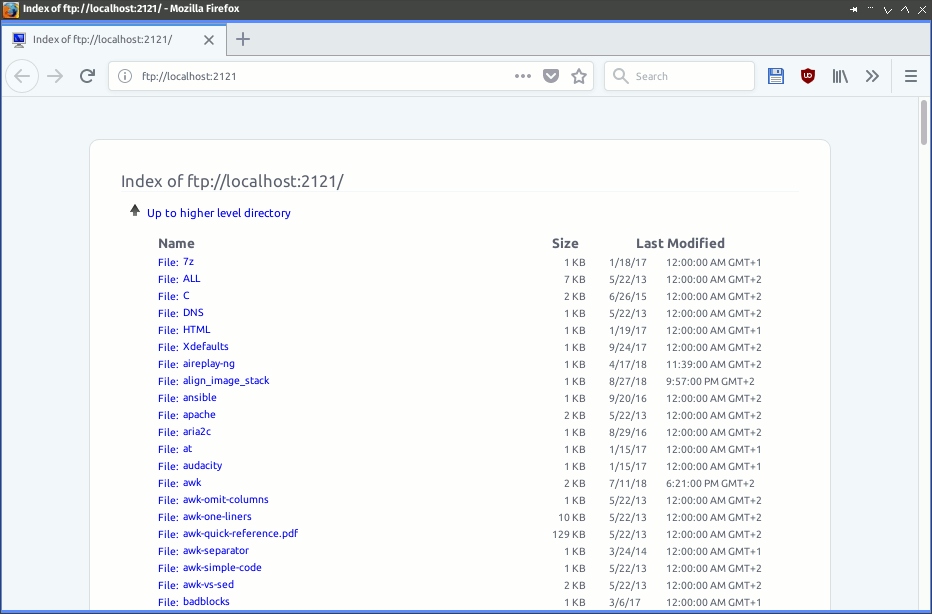 Hope you will find some of these useful, see you at Part 4 some day.