Looking at the picture below from BSDCan 2008 FreeBSD Developer Summit – https://people.freebsd.org/~bz/200805DevSummit/ – You may get impression that FreeBSD developers does not use FreeBSD on their desktops and/or laptops, which was often true in 2008. Ten years later this seem to have changed and more FreeBSD developers use FreeBSD. At least more then in 2008 😉 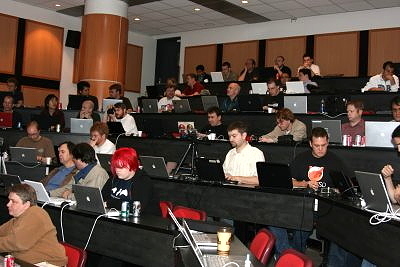 For those ones that still use Mac OS X on their desktops/laptops instead of FreeBSD there is now possibility to mount HFS+ filesystem volumes under FreeBSD in read only thanks to FUSE subsystem. The project that allows this – FUSE driver for HFS+ filesystems – https://github.com/0x09/hfsfuse – states that its “Created for use on FreeBSD which lacks a native driver (…)”.

Thanks to Tobias Kortkamp this driver is now available in the FreeBSD Ports tree as sysutils/fusefs-hfsfuse port.

The installation is simple:

My buddy that uses Mac OS X created a new HFS+ volume for me and put a file on it, lets mount it for a test.

Lets verify that with file(1) command.

Yep, that’s the one, lets mount it.

Everything seems to work flawlessly. If time permits I would update sysutils/automount port to add HFS filesystem support for convenient automount.